The Golden Arches Just got Sweeter 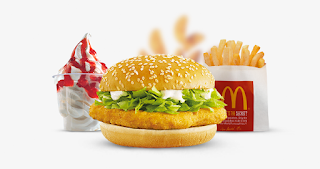 As the saying goes – there’s nothing new under the sun. And for McDonald’s, that’s kind of true. Sure they are testing out Sweet Potato fries in 18 locations in Amarillo, Texas. And they also have “Create Your Taste” locations throughout the U.S. where customers can build their sandwich just the way they want it – type of bun, toppings, condiments, even the meat/poultry choice. So the specifics are new.


But McDonald’s has always been a company willing to test new products in limited markets. At one time chicken sandwiches were being tested, McRib also was a test product. Salads too were initially a test product. The list is enormous – also including breakfast pastries, dots frozen treats, wraps, Angus beef burgers, etc. Most recently, they’ve changed things up to offer breakfast all day long.

In most cases, they are not the first one trying products – Carl’s Jr. and other stores have had Sweet potato fries for quite some time. Jack-in-the-Box has served breakfast items all day for years. We’re pretty sure McRibs are original – at least to fast food giants, but almost everything else that’s been tried or added to their menu – someone else already has done.

McDonald approaches new items with some caution – they know they have an established clientele with specific tastes, so the lasting changes – like salads, yogurt parfaits, and such happened because their customers wanted healthier options on the menu.

Sweet potato fries – not really all that much healthier in reality, are probably viewed that way because of an increase in fiber and some minerals – they have fewer carbs and protein, more sugar, and considerably more Vitamin A and Calcium. According to Doctor Roman Temkin from New York, "Neither has any fat in its natural form, but fries are loaded with it."

Recognizing McDonald’s fries are considered by many as unparalleled, adding sweet potato fries to the mix may not be as easy for McDonald’s as it should be for other fast food chains. Going to McDonalds for a burger or other sandwich,…well the fries are just part of the luxury – we’ll see how much the customers are willing to play with that taste bud outcome.

McDonald’s has been a strong contender in their industry for decades – partly because they know how to please their customers, get the word out in fun ways, double down on PR to promote new ideas. Even though only 18 locations – all in Amarillo are testing the new fries – the news hit and stuck with the national media. They are doing a lot right in keeping their brand in the public eye.

Juda Engelmayer is the SVP of NYC based PR Agency 5WPR. 5W has offices in Denver, LA and NY.
Posted by cary at 2:37 PM