Self-driving Semi: Wave of the Future? 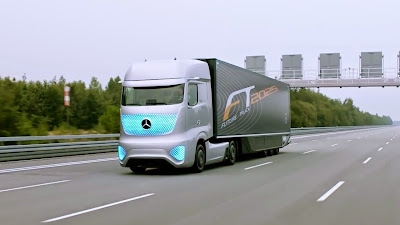 So, the media is buzzing about new “self-driving” semis, and some people are asking: “Didn’t they make a horror movie about this?” The one certainty about technology is that it will try to accomplish the impossible. Just when you think you have seen everything, the World of Tomorrow completely changes. Yes, people have been talking about driverless cars for years, but most folks imagined small single vehicles, not necessarily Optimus Prime.


But now the state of Nevada has given Freightliner a license to test an “autonomously driving tractor-trailer.” At least one truck is already in operation, and the company will begin test-driving the big rig on Nevada public highways in the near future. Surprise folks, the future. is NOW!

Before you completely freak out the next time you see a big rig barreling down on you on the interstate. Understand that this vehicle will always have a licensed truck driver in the driver’s seat to make sure nothing horrific happens. According to media reports, a human driver will take “full control” when the truck is approaching a city or suburban area and turn the vehicle over to automation on “certain limited-access interstates.”

So, is this next level tech coming to an interstate near you? Well, unless you live in Nevada, probably not. Only a handful of states currently allows licensing of self-driving vehicles of any kind, much less tractor trailers.

Reports from Freightliner have fixated on reassuring the public that all will be well. According to their releases about the program, the trucks can stay in their lanes and avoid hitting other cars without any driver input. Radar sensors have been equipped for the purpose of watching lane lines, as well as traffic.

Freightliner executives are excited about this program because they say the trucks could help reduce driver fatigue and help drivers be “more productive,” doing paperwork or planning the next haul while still completing the current transport. Sounds terrific and, if successful, these benefits could be realized. Either way, the company has a fairly steep PR challenge on its hands. This is the kind of thing people think is very cool … as long as it stays far away from them and their kids.
Posted by Unknown at 7:46 AM